Abu is Aladdin’s pet monkey. He is often seen getting into constant trouble every now and then because of his bad habit of stealing things. He was first seen in Disney’s “Aladdin”.

Aladdin’s faithful furry sidekick. Abu’s size and ability make him valuable in tight spots. He’s got a weakness for jewels and treasure, and when he’s around them he can’t think of anything else.

Aladdin’s faithful and rather furry sidekick. Abu doesn’t talk a lot, but he always understands what Aladdin needs.

Unfortunately, Abu can’t resist treasure, even if it belongs to somebody else.

In the first game, Abu is first seen trapped in a sand pit whith Aladdin. They manage to get out and help out Sora and co. Abu only appears on occasion, whenever Sora and Aladdin need him to help solve a puzzle in the Cave of Wonders.

In the third game, Abu is again getting into trouble when he steals a black lamp from the Peddler’s shop. Aladdin forces him to give the lamp back, only to discover moments later that it was the lamp Jafar was trapped into. Abu follows Aladdin, Sora and co. to the Cave of Wonders, so they can obtain some treasure to purchase the lamp. Abu activates a trap when he grabs a floating gem, but quickly helps Sora to solve the puzzle.

After the group defeats the Blizzard Lord and the Volcanic Lord, Abu tries to get away with a gem he swiped from the Cave, but Donald takes it from him and tries to keep it for himself. 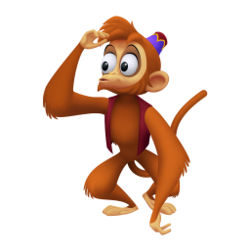