Ariel is the princess of the underwater kingdom, Atlantica. She is originally from Disney’s “The Little Mermaid”.

The youngest daughter of Triton, king of Atlantica. Outgoing and full of curiosity, Ariel hates being cooped up in her father’s palace. She dreams of visiting the world on land, where people live.

Triton’s youngest daughter. Ursula tricked her into helping steal his trident. With help from Sora and the others, all was put right. Still, she’ll never stop dreaming of exploring the world outside her father’s palace.

The daughter of King Triton who longs to see the outside world.

Worried by Flounder’s disappearance, Ariel was cajoled by Ursula into forking over the king’s trident.

We helped Ariel save Flounder and recover the trident, and she resolved to tell her father the truth.

The seventh daughter of Triton, king of Atlantica. Ariel has the most beautiful singing voice of all the merpeople. 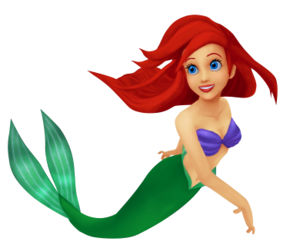