A warrior that Hades called forth from the Underworld.

In exchange for his freedom, Auron was commanded to defeat Hercules. But he refused to work with Hades, saying, “This is my story.”

He doesn’t talk about himself very much. What sort of story has he written thus far?”

Hades becomes increasingly frustrated in his attempts to defeat Hercules, since the hero kills every opponent the Lord of the Dead throws at him. At Pete’s suggestion that he “Send somebody already dead and save him the trouble,” Hades decides to bring out the “mother of all bad guys.” He goes to the deepest dungeon in the Underworld and summons Auron, offering to let him out if he kills Hercules. Auron declines and insults him, derisively telling him that “This is my story, and you’re not part of it.” Hades, in a rage, attacks him just as Sora comes in, and the group escapes, battling legions of Heartless and Cerberus along the way. The dead warrior tells the Keyblade master that it seems they were fated to meet, and asks if he needs a guardian (a reference to his origins in Final Fantasy X). Sora politely declines and leaves.

Sometime later, Hades seals Auron’s free will into a statue and forces him to fight Hercules. But once again, Sora comes through and reclaims his soul, and the four of them defeat Hades. Later, Auron repays Sora by giving him the Guardian Soul Keyblade.

Auron is seen during the credits fading back into pyreflies, the essence of a person’s soul in Final Fantasy X.

Auron is naturally a physical character with a small handful of support abilities, including two to restore his MP. He attacks very quickly, leaping through the air to strike enemies, and his Limit Break is very powerful. Auron has one armor slot, no accessory slots, and two item slots. His abilities are as follows: 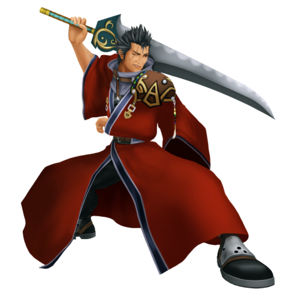