Captain Hector Barbossa is a villain from Kingdom Hearts II. He is only shown during the first visit to Port Royal.

Captain of the Black Pearl and leader of the undead pirates.

The medallions’ curse keeps Captain Barbossa and his men in a kind of limbo between life and death. Their true form is revealed in the moonlight, and it’s a terrifying sight to see.

These days, Captain Barbossa has joined up with Pete in a search for… something.

Captain Hector Barbossa was originally the Black Pearl’s first mate under Captain Jack Sparrow. Barbossa persuaded Sparrow to reveal the bearings leading towards the Isla de Muerta to him and the rest of the crew. Sparrow divulged its location, but that night, Barbossa led a mutiny and commandeered the Black Pearl, leaving Sparrow marooned on a tiny island, with only a single-shot pistol with which to commit suicide. Barbossa and the crew stole the cursed Aztec treasure, which bestowed each member of the crew with the same curse. The crew had become Undead Pirates, unable to enjoy the pleasurable things in life and trapped between life and death. To lift the curse, the crew must return all the Aztec gold to the chest on Isla de Muerta and offer the blood of all who had touched the treasure. The pirates also needed the blood of their former shipmate, “Bootstrap Bill” Turner, the only one to hold out against the mutiny and then sent his medallion away to his son before being tied to a cannon and thrown overboard.

For a decade, Barbossa searched for the last coin until he detected the coin’s “signal” from Port Royal. Pete visited the world at the time the Black Pearl came to plunder and loot Port Royal, extending his hand in aid to Barbossa. The pirates kidnapped Elizabeth Swann, thinking she was the daughter of Bootstrap and gaining the Aztec medallion she possessed. Barbossa reveals their cursed state to Elizabeth, as well as the blood payment, with a child of Bootstraps being a substitute. Upon arrival to Isla de Muerta, Barbossa performs a ritual offering a small amount of Elizabeth’s blood to break the curse. However, nothing happens. In his anger, he fails to notice Will Turner taking away Elizabeth. Jack Sparrow is left behind in the cave, and he is taken prisoner aboard the Pearl as it catches up with the Interceptor. Even after a lengthy battle for the medallion, Sora and the ship’s passengers are taken captive. Will Turner comes to their rescue, threatening suicide if his friends are not released. His noble act fails as Pete knocks him out cold and the rest are tied up in the Interceptor’s cabin, with explosives scattered around the deck.

Back at Isla de Muerta, Barbossa performs the ceremony with Will, but as he is about to spill his blood, Sora, Jack and the others crash the party. While Sora and gang dealt with the crew, Jack duels Barbossa until he is stabbed. However, Barbossa is stunned to find that Jack was under the curse as well; secretly taking an Aztec coin from the chest. Barbossa calls for Pete’s help, which is granted in the form of the Illuminator Heartless, who absorbs the moonlight, making Barbossa immune to the Keyblade. Sora and Jack destroy the Illuminator and defeat Barbossa while he lurks in the moonlight. Jack cuts his palm while Barbossa is recovering from his defeat, throwing the bloodied medallion to Will who bleeds on his own medallion. Jack then shoots Barbossa with the same pistol Barbossa marooned him with ten years before. Barbossa laughs until Will drops the two bloodied final coins into the chest, lifting the curse. With that Barbossa is overcome with the pain of death, saying he feels cold as he collapses. 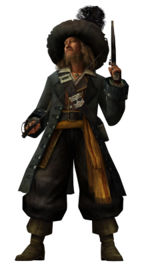