A magical flying carpet, loyal to Aladdin. Carpet can carry passengers over the vastness of the desert at great speed. The Heartless had Carpet pinned to the floor under a chest.

Carpet is an old friend of Genie’s. Ever since Aladdin found him in the Cave of Wonders, Carpet will do anything to help him. Carpet can carry Aladdin across the vastness of the desert in the blink of an eye.

It played an important role in helping Sora and co. to escape the Cave of Wonders. After sealing Hollow Bastion, Sora can “talk” to him in Aladdin’s house. Agreeing with the Carpet’s request will take you to a powerful optional boss, Kurt Zisa. After destroying the Heartless, it will take you back to safety.

Carpet and Genie went off to travel the world a year ago, leaving Aladdin depressed because of the town’s lack of excitement. Carpet and Genie return to Agrabah separately during Sora’s first visit.

When Sora returns the second time, it serves as their ride through the Desert Ruins to hunt Jafar, and later to escape. After the defeat of Jafar, Carpet becomes part of Sora’s mini-game in Agrabah’s desert ruins. While helping him escape, Sora is left alone to fight the Heartless that hunt them.

At the ending credits, Carpet is last seen flying with Aladdin and Jasmine on its back, with Genie and Iago following close behind. 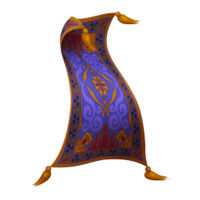