Cerberus is a mythical three-headed demon dog that first appeared in Disney’s Hercules, as guard dog to Hell. Hades used his pet in both Kingdom Hearts and Kingdom Hearts II.

Guardian of the entrance of the Underworld and Hades’s loyal servant. Herc defeated him once, but Hades has brought him back to fight Sora and his friends.

Guardian of the entrance to the Underworld and Hades’ loyal “pet.”

Hercules, Sora, Donald, and Goofy teamed up to defeat it last time, but Hades brought him back — and he’s as dangerous as ever.

In Kingdom Hearts, Cerberus acts as a back-up plan for Hades, if Cloud, whom Hades promised to help find Sephiroth for him, fails his task of eliminating Hercules and Sora.

When Sora and Cloud’s battle comes to an end (regardless of who wins), Hades sees that Cloud is no longer of any use to him, and sends Cerberus in. Cerberus manages to pin the Buster Sword to the ground when his back is turned, and is about to attack the others, but is held off by Hercules, allowing Phil, Sora, Donald and Goofy to escape.

Cerberus has Hercules, who is carrying Cloud, trapped, but Sora comes to help, returning the favor and allowing Hercules to escape. Sora manages to defeat Cerberus, and his efforts reward him the status of “Junior Heroes”. However, as Sora leaves, Hercules mentions to Phil that he had already worn Cerberus down by the time Sora intervened.

Cerberus can be fought again in full power at the Hades Cup, having four health bars instead of two (thus proving the fact that Hercules had worn it down). 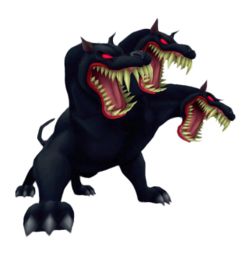