The Cheshire Cat is a pink and purple cat from Wonderland, with mysterious powers and constantly teleporting from one place to another. He speaks in riddles and wears an almost permanent grin on his face. He first appeared in Disney’s “Alice in Wonderland”.

A mysterious, grinning cat who talks in riddles and can appear and disappear at will. He loves to mislead and confuse.

A mysterious, grinning cat who always talks in riddles.

He appears when you least expect it, and disappears whenever he pleases.

In the first game, the Chesire Cat aided Sora and his friends during their time in Wonderland, guiding them not only in finding evidence of Alice’s innocence, but also in finding the Trickmaster. His true intentions though, were not very clear, and he seemed more interested on seeing how Sora would handle the challanges, then on seeing him succeed. After Sora an co. defeated the Trickmaster, the Chesire Cat was the one who told them that Alice was no longer in Wonderland, and had been taken by the shadows.

The Cheshire Cat appears as a figment of Sora’s memories in Wonderland, created by Naminé, giving him advice on how to save himself from being executed by the Queen of Hearts (albeit in riddles).

The Cheshire cat will reappear in this game, due to a screenshot showing the character near other screenshots (implying he will have the same role of tricking people).

The Kingdom Hearts manga reveals that the Cheshire Cat was offered a position among the Disney villains by Maleficent, but according to Jafar, he refused. 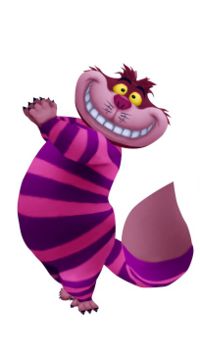