Chicken Little is a Summon that appears in Kingdom Hearts II. He is obtained by talking to Merlin after visiting The Land of Dragons and Beast’s Castle ( or Olympus Coliseum if Sora skipped either of the aforementioned worlds.) To summon him, Sora uses the Baseball Charm he receives from Merlin.

Chicken Little has more pluck and heart than most boys twice his size. He never turns away from a challenge, no matter how big it is.

He’s a loyal pal of Sora’s, and is always quick to answer a call for help.

By summoning Chicken Little, he can fire baseballs to attack the enemy. He also whistles occasionally to stun enemies and attract them to Sora, making damaging groups of enemies easier, and can heal 40% of Sora’s HP by using his Healing ability. He’s a particularly good summon for defense, as you can not be harmed while performing his limit.

His Limit is FPS (First Person Shooter) Mode. In this mode, you can target the enemy through a scope and will have two abilities. One will throw firecrackers at the enemy, knocking them back and stopping them from moving; the other lets him throw baseballs to stun and damage the enemy. You can end the limit by pressing the Square button. 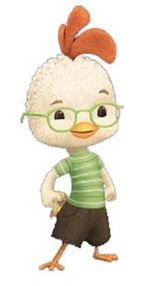 Title
Chicken Little
Keywords
chicken, little, walt, disney, cartoon
Description
You probably know the 2005 Chicken Little .. But did you know that he was alread...