Cid is a character from Final Fantasy VII, who makes an appearance in Kingdom Hearts and Kingdom Hearts II. He is voiced by Chris Edgerly in the English version of Kingdom Hearts II (having never spoken outside of text boxes in the original) and Kazuhiro Yamaji in the Japanese version.

Owner of an accessory shop in Traverse Town. A highly skilled engineer and a first-rate pilot. When the Heartless invaded his world, he escaped to Traverse Town on a gummi ship he’d built himself. He is an expert on gummi ships.

A gifted pilot who saved Leon and the others from the Heartless when they were just children.

An engineer, tech wizard and first-rate pilot. He met Sora as a castaway, while he was running a shop away from his hometown.

Now that he’s back home, Cid is an active member of the town’s Restoration Committee.

In the original Kingdom Hearts, Cid is one of the first characters that Sora befriends in Traverse Town. He first owns an accessory shop in the center of the town’s 1st district. Cid sends Sora out to deliver an old, broken book (The Adventures of Winnie the Pooh) to Merlin. Later on he owns a shop which specializes in Gummi Ship parts. This is true to his Final Fantasy VII counterpart, as he is an expert on air travel. In fact, most incarnations of Cid in the Final Fantasy series have been associated with airships and mechanics. Like Leon, Merlin, and other important characters met in Traverse Town, Cid was originally from Radiant Garden.

A memory-based version of Cid appears in Chain of Memories. 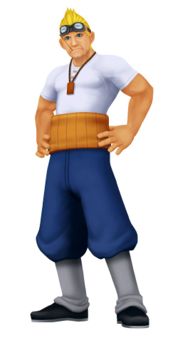