Cinderella is one of the classic Disney characters who appears in Kingdom Hearts. The main character from the 1950 film Cinderella, she plays a small but important role in the game as one of the Princesses of Heart. Her world was destroyed by Maleficent, but she was taken into captivity.

A hardworking young girl who’s often bullied by her stepmother and stepsisters. She is one of the princesses needed to open the final Keyhole, and was captured by the Heartless. Her world has already been destroyed.

Cinderella is originally born wealthy, but after her father passed away, her evil stepmother, Lady Tremaine turned her into her own home’s maid.

When the King of the Castle of Dreams held a ball for Prince Charming, she wished to go, but her stepmother and stepsisters forbade it. Her mouse friends encouraged it by secretly stealing different accessories to make a dress for her. On the night of the ball, however, Tremaine caught on quickly as Cinderella’s stepsisters tore apart her dress. As Cinderella cried in the garden, her Fairy Godmother and her mice friends helped her make a beautiful princess gown and a carriage to take her to the ball, where she would find a new future.

Due to unforseen consequences, however, Lady Tremaine somehow acquired Fairy Godmother’s wand and managed to keep Cinderella and Prince Charming apart for some time. But thanks to her mice friends, they manage to end up together again.

She was taken and held deep within Hollow Bastion until all seven Princesses were collected. It is unknown when she was captured but from scenes it can be assumed it was before Snow White and Alice placing her as either 2nd captured or 3rd either before or after Belle.

Once her heart was restored, she stayed behind in the castle of Hollow Bastion to hold back the darkness lurking out of the Final Keyhole, until Sora returned and closed it. Though the Final Keyhole was sealed, Cinderella and the others could feel another dark power approaching from somewhere else (End of the World where Kingdom Hearts was held), and asked Sora to stop Ansem from fulfilling his evil plans.

When Kingdom Hearts was sealed she was returned to her own world.

Cinderella is absent in Kingdom Hearts II, though her name was part of the password that allowed access to the DTD dataspace in Tron’s world. 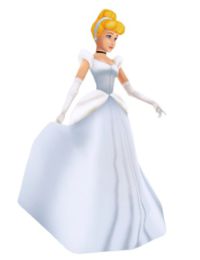