Clayton is a villain from the Kingdom Hearts series, originally from the 1999 Disney animated feature “Tarzan.” He is voiced by Brian Blessed. Clayton was the only Disney villain in the first game who could control Heartless without being a part of Maleficent’s group.

A veteran hunter. He acts as Jane’s guide on her expedition to the jungle. He thinks of animals only as prey, and dreams of the money to be made selling gorillas to zoos back at home.

A veteran hunter, Jane’s guide on her expedition to the jungle. He thinks of animals only as prey. His lust for power and the darkness in his heart attracted the Heartless, and they used him for their own evil purposes.

Clayton wields a double-barrel shotgun, a weapon he uses to hunt all manner of creatures in the jungle. He joins Jane Porter and her father on an expedition to the jungle to “study” gorillas, but he secretly wishes to sell them to the zoos in England. He has little patience for Tarzan, as he refuses to reveal the location of the gorillas.

Clayton found Donald and Goofy in a bamboo thicket after they landed in the Deep Jungle. Suspicion over Clayton’s activity arose when Clayton said that Donald and Goofy were “not much use for hunting gorillas”, when he and Jane Porter actually came there for research. He questioned Tarzan about the gorillas’ nesting grounds, secretly desiring to hunt them down. Eventually Tarzan agreed to take him to the nesting grounds, but on their way there, Clayton attempted to shoot Terk, a young gorilla and Tarzan’s friend. He was stopped by Sora, Donald, Goofy and Tarzan, and was forbidden by the furious Jane from approaching the gorillas. His anger and determination to hunt the gorillas lured the Heartless to him, and the darkness in his heart took him over. He kidnapped Jane and Terk and imprisoned them in the jungle. Then, he hunted out the location of the gorillas with the help of the Heartless. Just as he was about to kill them, Sora, Donald, Goofy and Tarzan arrived, finding that he has lost his heart. Sora and company did battle with him and his Heartless. Although he proved to be proficient at using a shotgun at long range and even close range, swinging it like a club, Clayton and his Heartless were easily defeated. Clayton, outnumbered, summoned a Heartless called the Stealth Sneak, mounting it and starting a boss battle. When Clayton wasthrown from his steed, Sora defeated him. Afterward, the Stealth Sneak fell and ultimately crushed Clayton to death; his body disappeared with the Heartless. 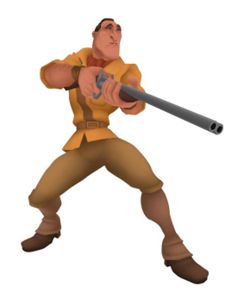