Cogsworth is a character from Kingdom Hearts II. He made his film debut in Disney’s Beauty and The Beast. He is actually a servant of Beast who was enchanted by a spell along with all the other inhabitants of the castle. The spell turned him into a clock whose hands give him a mustache. He is often paired with the other castle staff members.

The Beast’s majordomo. He became a clock when a enchantress put a spell on the castle. Cogsworth is particular about order and punctuality. Maybe that’s why he turned into a clock?

On the first visit to Beast’s castle, Belle tells Sora to rescue Cogsworth and company from the castle dungeon. Upon doing so, he tells Sora about the Beast’s curse and how they were imprisoned by the Beast. Then he and the others show Sora a secret passageway to the West Wing and the Beast’s room – Cogsworth’s job is to lower the lamps for Sora and company to light them. When Sora, Donald, and Goofy fight the Beast to turn him back to normal, Cogsworth assists by making loud noises to wake the Beast up, with help from Sora’s magical Keyblade. 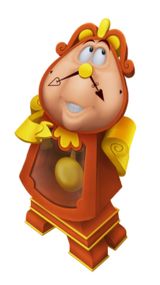 Beauty and the Beast - Be Our Guest [High Quality]