The Crocodile, also known as “Tick Tock the Croc” though never given a proper name, is a character from the Neverland world, and one of Captain Hook’s enemies. He acquired a taste for the pirate captain when Peter Pan chopped off the captain’s hand and fed it to him. He now follows Hook around everywhere, hoping to get a second taste of the captain.

The crocodile also swallowed a ticking clock, that now, unfortunately for the crocodile, warns Captain Hook if he is approaching. It is now a trademark of the crocodile, that foreshadows its arrival in a way that terifies the captain. It is a constant humiliation to him.

The crocodile appears in a small role in Kingdom Hearts. He randomly appears in scenes, sending Hook fleeing for his life. He almost devours Sora when he is thrown off the plank of Captain Hook’s Ship, but Sora quickly learns how to fly and escapes. He later appears after the boss battle against Captain Hook, and chases Hook (who has fallen into the water) into the horizon. The pair are never seen again.

A seagoing reptile big enough to swallow a man whole — and he’s always hungry! He got a taste of Hook once and never forgot it. Hook can tell when he’s near by the sound of the clock ticking away in his stomach. 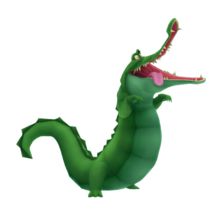 Top 10 Best Disney Crocodilians 1937-2016
Boy’s Body Recovered after Disney Gator Attack
Never Smile At A Crocodile | Peter Pan
What Does Disney World Do With Its Alligators?