Daisy Duck is the duchess of Disney Castle and the girlfriend of Donald, King Mickey’s court magician. Most of what Donald does is for King Mickey and Daisy. This is shown in Kingdom Hearts when in a cup seed Donald says “For Daisy!”.

Donald’s sweetheart. She’s helping Minnie while the others look for King Mickey. She has Donald under her thumb, and does a good job of keeping him in line.

A lady-in-waiting to Queen Minnie at Disney Castle and Donald’s girlfriend.

She’s helping Queen Minnie run the castle while the others are away.

She and Queen Minnie are walking in the courtyard when they overhear Donald talking to Goofy about the King’s disappearance. After finding out about the troubles of the universe, Donald and Goofy are sent to Traverse Town to find Leon to look for “the Key”. She last sees her darling go off in the Gummi Ship but before Donald leaves he asks her to keep care of something, whatever that is. She does not reappear until the ending credits where she and the Queen look at the nephews of Donald walking in the courtyard.

After peace is restored to Disney Castle, Daisy finally appears, but is upset with Donald for having been out of reach for so long. When the Cornerstone of Light reacts and helps Sora open the gateway to Atlantica and Port Royal, she is asked to let Donald go with them for a while longer. Donald promises her that he will be back soon.

In the ending credits, she is so glad to be reunited with Donald that she runs to his side to hug him. 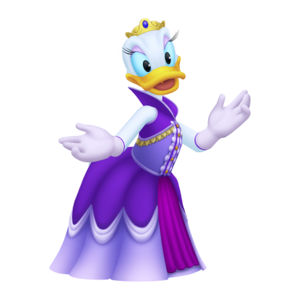