Demyx the Melodious Nocturne(?????? Yaso no Shirabe), is Number 9 in Organization XIII. He plays a minor role in Kingdom Hearts II, where he is tasked with tracking down Sora to liberate Roxas’ “true disposition”. Although he dislikes fighting, he is directed to use “aggressive tactics” against Sora and his companions. He wields a sitar and uses the power of water. He also controls the Dancer Nobodies.

Demyx will be a playable character in the multiplayer gameplay of Kingdom Hearts 358/2 Days.

He was surveying the world of Olympus, and even swiped the Olympus Stone. He’s a lousy fighter.

Organization XIII’s Number IX. He used a type of instrument called a “sitar” to control water…but he wasn’t very good at fighting.

Demyx was under orders to “liberate Sora’s true disposition” while surveying the world of Olympus.

Organization members all wear black coats, and It’s said their numbers were assigned in the order they joined. In addition, their names share something as a mark of their brotherhood.

Demyx’s role in the Organization’s plans is minor. He is sent after Sora on suggestion by Xigbar to find him and “liberate his true disposition”, that is, to keep Sora on the path Organization XIII wish him to take. He also contacts Hades, but no deal was made and Demyx promptly flees, saying “Run, run away!”, passing by Sora and co. and leaving them puzzled at his outburst. Later, Demyx steals the Olympus Stone, and soon encounters Sora within the Underworld once more. Although Sora doesn’t understand the meaning of Demyx’s objectives, nor why Demyx calls him Roxas, Demyx is unable to fulfill them and took the next ordered step, which is to attack Sora. Demyx at first only summons “forms” of water – water shaped into himself and musical notes, which then attacked Sora, Goofy and Donald – which he controlled with his sitar. He is unsuccessful in defeating Sora with his water forms, however, and escapes instead of continuing the fight.

Demyx confronts Sora later in Hollow Bastion during the Battle of 1000 Heartless, again greeting Sora in a rather friendly manner. However, Sora and his companions’ response is hostile, even claiming that Demyx is unable to fight. Demyx still maintains his personality despite the insult, with only a “You shouldn’t judge anyone by appearance” in a slightly deeper tone. But when Sora and co. claim that the Nobodies do not have hearts, Demyx’s normal carefree air vanishes, and he silences them with a much darker tone and attacks the “traitor” again with all his strength. In the end, however, Demyx is defeated again and fatally wounded. After lamenting his loss, he fades into darkness, the first Organization XIII member to do so in Kingdom Hearts II. 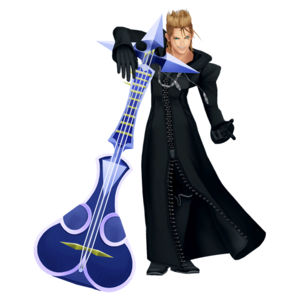