Elizabeth Swann is the daughter of the governor of Port Royal. Weak though she appears to be, nobody has any idea what she is truly capable of. She is first seen in Kingdom Hearts II.

Daughter of Port Royal’s governor. To protect Will, she kept his pirate medallion hidden from her father and his men. A bit romantic about pirate life, she likes to steal a glance at the medallion every now and then.

Will is a bit shy and formal around Elizabeth because of her father’s position. She kind of wishes he wouldn’t be.

Elizabeth is a spirited and independent-minded character. Throughout the three films, she transforms from a modest young lady into a courageous pirate. Elizabeth has always been fascinated by piracy and life at sea, but she is also revolted by pirates’ aggressive, wild nature, especially when she meets Captain Jack Sparrow, who made his escape from Port Royal at her expense. However, she was grateful to him for saving her life and unsuccessfully attempted to prevent his arrest. Even after becoming a pirate, she retains her sense of propriety, as well as her loyalty and compassion for loved ones (namely Will Turner, her father, and later, Jack Sparrow).

Elizabeth is first captured by the undead pirates and taken away because she tells them that her last name is Turner. Sora and company comes to Port Royal just as she is being taken prisoner and tries, but fails, to rescue her.

Later Sora, Donald, and Goofy help Jack Sparrow and Will Turner command the Intercepter, the fastest boat in the British Navy. With it, Sora and friends rescue Elizabeth and, after some complications, defeat Captain Barbossa and the undead pirates.

Elizabeth reappears on the Black Pearl during Sora’s second visit to Port Royal. She alerts the party that Will has gone missing and sets out to find him with them. Eventually, they find him on the Interceptor and manage to save him. Thereafter, Sora and the others get attacked by Luxord’s Nobodies and Heartless and get blown to another ship, which is later destroyed.

Elizabeth, Sora and friends along with Jack work together to find them and later, the medallions and succeed.

She doesn’t reappear untill Sora finds all the medallions and right before the second battle with the Grim Reaper heartless. 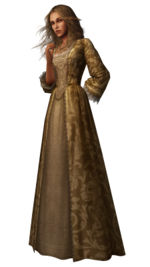