Fa Mulan is a young woman from the Land of Dragons who is a party member in Kingdom Hearts II. Determined to bring honour to her family, particularly her ill father, Mulan cuts her hair, steals her father’s armour and impersonates as a soldier named Ping to join the army to defeat Shan Yu. Mulan is a generally weak fighter to begin with, but eventually becomes a skilled swordsmaiden.

Ming-Na reprises her role as Mulan. Though neither she nor Princess Jasmine sang in their Kingdom Hearts appearances, they both have the same singing voice actor in their original movies, Filipino singer Lea Salonga of Miss Saigon fame.

The only daughter of the distinguished Fa family, Mulan has a hard time acting the way everybody wants her to. She’s sure she’ll never fit in. But when her aging father was ordered to join the Imperial Army, she sneaked away and risked her life to take his place.

The only daughter of the distinguished Fa family. Her real name is Fa Mulan.

She disguised herself as a man and joined the Imperial Army in her father’s place to fight the Huns and uphold the family’s honor. The other soldiers know her as Ping.

Mulan never actually appears in the game, presumably disappeared along with her world when it was consumed by Heartless. Mushu survived and became a Summon.

Sora, Donald and Goofy meet Mulan as “Ping” outside the army’s camp with Mushu. Sora and Donald are shocked when Goofy reveals to them that she is actually a girl but promise to keep her identity a secret. The group join the army, Captain Shang having little faith in “Ping”, despite the constant comments from Sora, Donald and Goofy. Mulan slowly impresses Shang, defeating Shan Yu and his Heartless single-handedly by causing an avalanche, and even saves Shang’s life. But Mushu accidentally gives away Mulan’s identity. Shang, outraged of her deceit, chucks her and the others out of the army before leaving. Mulan and the others see Shan Yu and several surviving Heartless emerge from the mountain and make their way to the Imperial City. Mulan fails to convince Shang to believe her, but she soon gets his trust again when the Emperor is kidnapped. Mulan, Sora and the others battle and kill Shan Yu, Mulan being thanked personally by the Emperor who bows respectfully. Shan Yu’s sword then suddenly glows and gives Sora access to another world.

Mulan is reunited with Sora during his second visit to her world. Mulan is hunting a cloaked man who she believes is an enemy spy, but Sora knows it is a member of Organization XIII. Following the cloaked man to the mountains, they see a Heartless Dragon called the Storm Rider head for the Imperial City. They head there where they find the cloaked man (there are actually two, one being Riku) who reveals himself to be Xigbar. Mulan and the others battle the Storm Rider and defeat it. Mulan gives her support to Sora when he leaves to continue his journey to find Riku and Kairi. 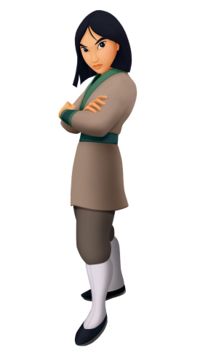