Flounder is Ariel’s best friend. He is not very brave and often gets easily scared, but whenever Ariel is in distress, he would rise up his spirits to help her out in any type of situations.

Ariel’s trusted friend. Flounder will do anything for her. He’s small and not exactly brave, but he’ll never leave Ariel’s side, even when it means facing danger.

He’s not exactly brave, but Flounder is Ariel’s most loyal friend.

Ursula kidnapped Flounder as part of her plan to trick Ariel and steal the trident.

Ariel’s trusted friend Flounder would do anything for her. He’s small and not exactly brave, but he’ll never leave Ariel’s side, even when it means facing danger.

When Sora, Donald and Goofy first arrive, he was chased by Heartless with Ariel and Sebastian, but were saved by the trio. Because Sora and the others were new to the sea world, they did not know how to swim flexibly. Flounder, then became their instructor and had them chase after him so he could teach them.

When Ariel and the others set off to find the Keyhole, Flounder was the one who told them about the dolphin that would help them swim against the water currents. 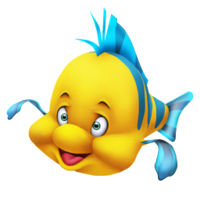