Goofy Goof appears alongside Donald and Sora in all three of the Kingdom Hearts games. Goofy is Captain of the King Mickey’s army. He and Disney Castle’s court magician Donald went out to search for the King, and ends up teaming with Sora for the rest of their journey.

Despite his position at Disney Castle, Goofy dislikes using weapons (instead using a simple shield in combat) and attempts to avoid fighting whenever possible, preferring to find peaceful solutions to problems. Though simple-minded and clumsy as always, and constantly the butt of comic relief, Goofy is the constant voice of optimism and, surprisingly, selectively perceptive, often noticing things others miss and keeping his cool when Sora and Donald lose it. He comes off as the sage of the group, despite how he is portrayed in the Disney cartoons.

Captain of the Royal Knights. He avoids fighting whenever possible. Mickey’s most loyal subject. He set out in the gummi ship with Donald to find King Mickey. He joined forces with Sora, obeying Mickey’s command to follow the key bearer.

Goofy made his first screen appearance in “Mickey’s Revue” (1932).

Captain of the royal knights. He avoids fighting whenever possible. Mickey’s most loyal subject. Because Mickey said to follow the key bearer, he once left Sora to follow Riku. But friendship soon led him back to Sora.

Goofy made his first screen appearance in “Mickey’s Revue” (1932).

Captain of the Disney Castle Royal Knights. He set out with Donald after the king’s disappearance.

He is cheerful and calm, and no one is more loyal to the king.

Captain of the Royal Knights. Not long ago, Goofy left Disney Castle with Donald in search of King Mickey. Along the way, they joined Sora, obeying the King’s command to “follow the Keybearer.” 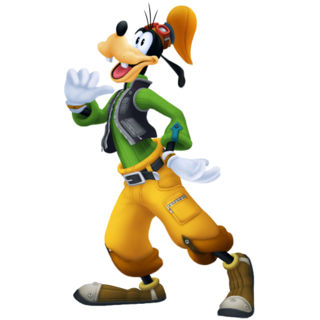