Hades is a villain from the Kingdom Hearts series, originally from the 1997 Disney animated feature Hercules.

Lord of the Underworld. He’s using the Heartless to try and take over the world. To get Hercules and Sora out of the way, he sent Cloud to fight them in the Coliseum.

Lord of the Underworld. He’s using the Heartless to try to take over the world. Hades wants Herc and Sora out of the way, but all his schemes against Sora and the others seem to end in failure.

Ruler of the Underworld.

Hades can’t stand Hercules. He tricked Cloud into challenging Hercules to the death, but we put an end to his plotting.

God of the Underworld who seeks to rule over all.

Hades appeared before Riku as a token of the indelible darkness in his heart. 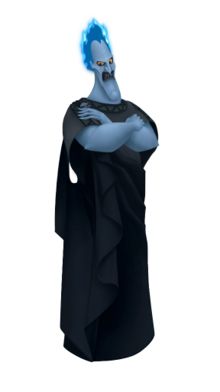