Hercules is one of the primary characters featured in Kingdom Hearts, Kingdom Hearts: Chain of Memories and Kingdom Hearts II. He is a demi-god and son of Zeus, living on Olympus Coliseum. His enemy is Hades, lord of the Underworld. Hercules possesses great strength and can battle the toughest of monsters. He is very supportive of Sora’s goal to become a true hero.

A legendary hero with godlike strength. He’s the son of the gods Zeus and Hera, but not a god himself. The people regard Hercules as a true hero.

Son of the gods Zeus and Hera, but not a god himself.

With godlike strength and a gentle heart, Hercules is a true hero.

He has never lost at the Coliseum games.

A legendary hero with super strength — and a pretty great fellow, too. Hercules is the son of the gods Zeus and Hera, but he’s not a god himself. Not long ago, he joined forces with Sora and his friends to stop Hades from taking over the world.

Hercules really impresses the crowds when he battles in the Coliseum. He’s never lost a match yet. 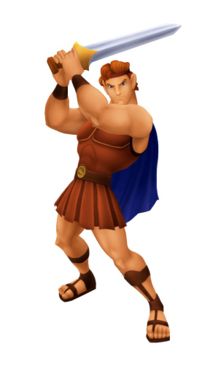