Jack Skellington is the “Pumpkin King” of Halloween Town. He is responsible for coming up with new and exciting ideas for each year’s Halloween festivities. He first appeared in Tim Burton’s “The Nightmare Before Christmas”

The pumpkin king. He loves to scare people out of their wits. Headstrong, confident, and likes grand gestures. Now he’s working night and day to make this year’s Halloween festival the greatest ever.

He scared up some fun in “Tim Burton’s The Nightmare Before Christmas” (1993).

Halloween Town’s master of the macabre.

Jack is always looking for new ways to bring the spooks and shivers of Halloween to all.

The Skeleton King. He loves scaring folks more than just about anything. When Sora and his friends first met Jack, he wanted to use the Heartless to spice up his frightening Halloween celebration. But things didn’t work out quite like Jack planned.

Now Jack’s enchanted by Christmas. He’s determined to give Santa a rest and show he can do a top-notch job running the big day. 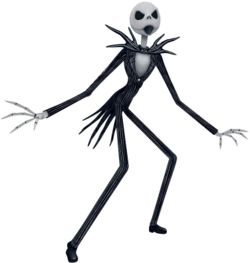