Jiminy Cricket is a character from the Kingdom Hearts games, originally from the film “Pinocchio”.

That’s me! The cricket who keeps Pinocchio to the straight and narrow. I’m along on the quest as the royal chronicler.

I also act as Pinocchio’s conscience, so he’ll know right from wrong.

Glad you could join us! Cricket’s the name-Jiminy Cricket. Queen Minnie asked me to come along on this quest as the Royal Chronicler. And what an adventure it’s been! You might remember that I also help my pal Pinocchio out as his official conscience. I try to keep the little fellow on the straight and narrow and show him right from wrong. He sure can be a handful sometimes.

In the Kingdom Hearts series, he chronicles the adventures of Sora, Donald, and Goofy in his journal. Although he is first met in Disney Castle (when Minnie tells him to accompany Donald and Goofy in their search for King Mickey), he is originally from the unnamed Pinocchio world (the only portion of it being present is the Monstro world).

Jiminy first makes his appearance in Disney Castle and becomes Sora, Donald, and Goofy’s royal chronicler under the order of Queen Minnie. He explains to Goofy that he escaped right before his world was destroyed and he was scattered from his friends. After they befriend Sora, they travel to many different worlds in search for the King, Riku, and Kairi. Some time after, he meets up with Pinocchio in Traverse Town and tells him to stay put while he sets out to find his father.

When they head for Atlantica/Halloween Town (depending on which world the player chooses), they get swallowed by the giant whale, Monstro and meet up with Pinocchio again, this time reunited with his father Geppetto. But then Pinocchio was lured away from his friends by Riku and they searched for him until a Parasite Cage Heartless captured Pinocchio and attempted to take his heart. He failed, but then Riku captured him and stole his heart in hopes to be able to replace Kairi’s. Jiminy, Sora, Donald, and Goofy manage to restore Pinocchio’s heart with the united power of theirs. Then, they battle Parasite Cage again and defeat it once and for all, but then Monstro feels ill and spit them out and separate Jiminy away from Pinocchio. He finds out that Pinocchio and Geppetto are okay after they visit Traverse Town again and find them living there.

Jiminy appears alongside Sora, Donald, and Goofy, and his role in this game is rather bigger as he appears more often. 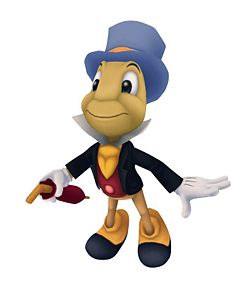