Kala is the adoptive mother of Tarzan, despite being a gorilla and raised him as her own – since her original child was killed by Sabor.

The gorilla who found Tarzan in the jungle. She has always helped and defended him, even when he was scorned by the others. Kala is not happy about Tarzan’s contact with people, but she knows it’s important to him.

Kala and Kerchak’s child was killed by Sabor. Kala later found Tarzan as a baby in a treehouse and saved him from Sabor. Kerchak accepted Tarzan into the family, but not as his son. Kala raises Tarzan into a troublesome young boy and into a man. Kala reveals to Tarzan his origins and allows him to leave with Jane, Clayton and Professor Porter. Kala is captured by Clayton and his men but later freed Tarzan and Jane. Kala stays by Kerchak after he is wounded by Clayton and dies, Tarzan becoming the new leader. Kala accepts Jane and her father into the family.

Kala has a minor role in the game, staying by Kerchak’s side while Tarzan asks them to trust Jane, Sora, Donald and Goofy. Kala is captured by Clayton and the Heartless, but saved by Sora and Tarzan. 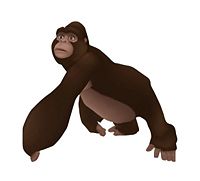