Kanga is a character from the 100 Acre Wood world of Kingdom Hearts, Kingdom Hearts: Chain of Memories and Kingdom Hearts II. Though her world has been shown in the games, she does not appear until the third installment. She is based on his appearance in Disney’s Winnie the Pooh franchise. Kanga is Roo’s kangaroo mother, very gentle and a typical mother figure.

When she first appears, she hears from Piglet that Pooh has forgotten everything about his friends and makes a medicine in attempt to restore his memory, but Tigger takes it, thinking it is a present to him. Though they get it back, Pooh never drank the medicine.

Roo’s mother. When she leaves her house, she just pops little Roo into her pouch and off they go.

Kanga is always ready with kind and gentle advice for her neighbors in the Hundred Acre Wood. 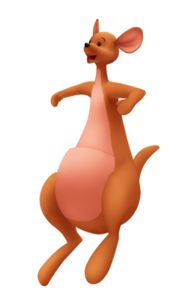