Kerchak is the leader of the gorillas and Tarzan’s “father”. He was very nervous about trusting humans and when Sora and friends came to Deep Jungle, there was no exception.

As a gorilla, Kerchak possesed great strength but was powerless at the hands of Clayton’s shotgun.

Boss of the gorilla pack. He was against letting Tarzan join the group, but Kala’s resolve won him over. Kerchack worries that Tarzan’s contact with people will bring danger to the gorilla community.

He established himself as leader of the pack in “Tarzan” (1999).

Kerchak is distrustful of humans. He doesn’t like humans very much and is very cold when they are near. When Sora, Donald and Goofy met him,he acts very coldly at them, and even ignored Tarzan’s request to take them to the waterfalls. But after Sora and co. saved the pack from Clayton, he lets them into the waterfalls, where they sealed the Keyhole. 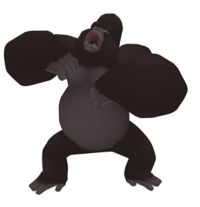