King Triton is the aging but powerful ruler of Atlantica. He had long white hair and a beard to match, and is very majestic-looking. He carries the Trident, which contains undescribable powers. He is the father of Ariel, who he deeply cares for, despite the fact he shows it through a stone heart and a very bad temper. The Trident is used to activate the world’s Keyhole in Kingdom Hearts.

King of Atlantica, who is backed by the power of his trident. He has forbidden Ariel to have any contact with outsiders, which only led to her yearn to grow even stronger.

The Sea King who rules Atlantica; the trident is the symbol of his power. Triton dearly loves his daughter Ariel, but to ensure her safety and the security of his kingdom, he’s strictly forbidden her to have contact with anyone from the human world.

The Sea King who rules Atlantica. At least, he used to — until Ursula changed him into a small, ugly sea creature. But he was willing to pay that price to save Ariel from Ursula’s evil magic.

Triton saves Ariel, Sora, Donald and Goofy from some aproaching Heartless. He is immediately distrustful of the three newcomers and later confronts them in Ariel’s Grotto and advises Sora to leave since he is the Keyblade Master. Ariel retrieves an item that can activate the Keyhole, but Triton destroys it. Ariel falls victim to the plans of Ursula who steals the Trident, leaving Triton injured. After Ursula’s defeat, Triton uses the Trident to help seal the Keyhole.

Triton returns as ruler of the sea, but is concerned more than ever for Ariel after she saves a human, Prince Eric, from death and has fallen in love. He asks Sora to help her forget about the human world and practice her singing. Triton discovers a statue of Eric in Ariel’s Grotto, and in his anger, he destroys it. Ariel once again falls victim to Ursula’s plot and becomes a human for three days. Ursula captures Ariel and takes Triton’s Trident. The Trident is used against her by Eric and kills her. Triton finally accepts Ariel’s love for Eric and allows her to stay with him. He is seen in the end credits bidding farewell to Ariel and Eric with Sebastian and Flounder.

In Kingdom Hearts, King Triton, at first, tells Sora, Donald and Goofy that they should leave his world because Sora is the Keyblade Master, and he believes that the Keyblade “shatters peace and brings ruin” – which happens to be the theory in one of two legends in the Ansem Reports. It is currently unknown how King Trition knows about the Keyblade and its master. 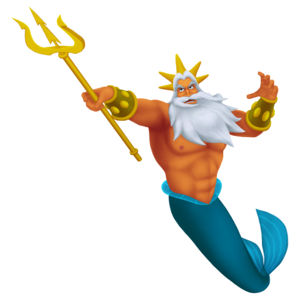