Ling is one of three aspiring warriors who joined the Imperial Army, the other two being Chien Po and Yao.

He and Yao shared a dislike for Sora, Mulan, Donald and Goofy, but he eventually changed his mind after they saved the country from Shan-Yu and his army of Heartless.

During the credits, Ling is shown spying on Mulan and Li Shang along with Yao and Chien Po, but the three are discovered when they fall down, alerting the Captain and, most likely, earning them punishment.

One of the men drafted to help defend China from the Hun invasion. 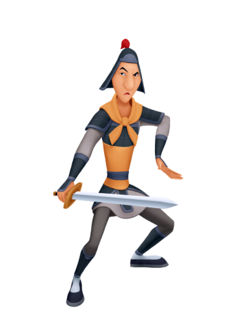