Luxord the Gambler of Fate(?????? Unmei o Tosu Mono) is Number 10 in Organization XIII. He first appeared, cloaked and hooded, before Sora along with Xemnas, Xigbar, Xaldin, Demyx and Saïx to taunt him in his return to Hollow Bastion. He harassed Sora and his friends in Port Royal and later confronted Sora in the World that Never Was. Although his role in the game is minor, he is one of the Organization members who had not been defeated outside of The World That Never Was. He, as a man who deals in games and fate, controls the Gambler Nobodies. He was the third last member to die in the Organization XIII.

Kingdom Hearts 358/2 Days will feature Luxord as a playable character. Scans have also shown him teaming up with Roxas in Wonderland.

Organization XIII’s Number X, a master of rhetoric whose words left Sora and his companions quite perplexed.

Luxord was using the cursed medallions to conduct experiments on behalf of the Organization.

Organization XIII’s Number X, a gambler who can manipulate time.

Having shaken Sora and his companions with wily words, Luxord entertained himself by drawing them into a game-like battle.

In Port Royal, Luxord used Heartless and the cursed medallions to conduct experiments on the Organization’s behalf and collect hearts.

The Organization has hinted that not only do they know about the Keyblade, but they may know things about Sora himself. Are they playing mind games, or is there truth to their words?

Upon making second rounds to the worlds in search of the Organization’s stronghold, Sora once again allies with Jack Sparrow in Port Royal, where he learns that Will Turner has gone missing while investigating the theft of cursed pirate gold by a man in a black hood. They seek out Will on the Black Pearl and find him on the Interceptor.

Luxord appears on the Black Pearl after they have recovered Will, with the cursed gold beside him, greeting Jack Sparrow. He reveals that he is at Port Royal to assess the value of the cursed gold to the Organization and calls up Grim Reaper, a Heartless. After the Heartless is thrown overboard, Luxord invokes the right of parley before Jack can get off a shot with his pistol. He agrees to hand over the chest, but takes four medallions from it when he does so, sending them off to his Gambler Nobodies, who escape with them. This has the effect of returning the curse on Jack and tying his curse to Grim Reaper, who becomes cursed, as well. The Grim Reaper then knocks Sora, Donald, Goofy, and Jack onto the Interceptor, and has the cannons of the Black Pearl destroy the ship. Sora and the others survive, and track down the medallions, and defeated the Grim Reaper back at Port Royal, lifting the curse on Jack. Even with Luxord’s experiments having failed, he manages to bring the heart that the Grim Reaper was holding to Kingdom Hearts, and promptly flees. 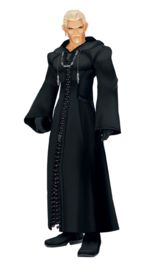