Or “Meg” for short. She’s tough, witty, and a true friend to Hercules. Since she met him, Meg’s been trusting folks a bit more than before.

Meg set out alone for the Underworld. She knew Hercules was exhausted and wanted Hades to give him a break from fighting in the Coliseum.

Upon Sora’s first Kingdom Hearts II visit to the Coliseum, he rescues Megara from a pack of Rabid Dog Heartless. Meg had been on her way through the Underworld looking for Hades, hoping to convince him to give Hercules a break. Not wanting anything to happen to Meg, Sora offers to do this task for her and she happily accepts. She is later kidnapped by Hades as bait for Sora to unlock the Underdrome. After Sora returns to the Olympus Coliseum, he finds it being destroyed by the Hydra. During this boss fight, Megara sits on the side lines and drops HP, MP, and Drive Recovery balls as Sora passes by her.

During Sora’s second visit to the Coliseum, he, Hercules and the others are forced to participate in the matches of the Underworld Coliseum. After finding out that Auron is being controlled by Hades, Hercules distracts Hades while Sora and the others go to find the little statue that holds Auron’s heart hostage. Upon returning Auron’s heart, Hades throws Megara into the stream of River Styx, Hercules then sacrifices himself to save her and restores his confidence in the process.

During the ending credits, she is last seen being with Hercules, Phil and Pegasus beholding the restoration of the Olympus Coliseum. 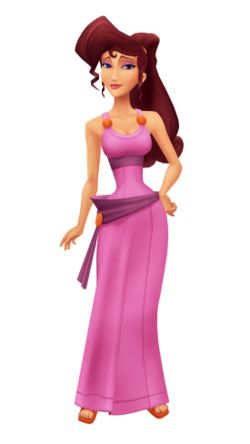