Merlin is a recurring character in the Kingdom Hearts series. He helps Sora understand magic when the boy appeared in Traverse Town.

A great sorcerer living on the outskirts of Traverse Town. Merlin’s wisdom and magic powers rank second to none, and he teaches Sora and his friends about magic. He has a mysterious bag that can hold anything, no matter how large.

Merlin first tutored Arthur in how to be king in “The Sword in the Stone” (1963).

A powerful wizard who’s currently living in Hollow Bastion. He’s letting the Hollow Bastion Restoration Committee use his house as a meeting place.

Merlin has wisdom and magical powers that are second to none, and he taught Donald most of what he knows about magic. He also has a mysterious bag that can hold anything, no matter how big it is.

Merlin is first introduced as a resident of Traverse Town. He lives in a ramshackled house hidden in a secret underground lake behind a wooden door with a fire symbol, located in the Third District of Traverse Town. He lives with the Fairy Godmother. Sora, Donald and Goofy first meet Merlin when they are supposed to deliver an old book to him. Merlin appears in a puff of smoke to greet them. Merlin teaches Sora and his friends how to properly use magic. The upper level of his house is empty and can be used for magical training against enchanted furniture. Merlin also introduces Sora to the 100 Acre Wood (although Sora accidentally is pulled into the world through the book). If you complete certain tasks, Merlin will hand Sora and his friends magic themed weapons, such as the Spellbinder Keyblade, and the Dream Shield.

Merlin now lives in Hollow Bastion which is being rebuilt. He lives in a large cottage which serves as the headquarters for the Hollow Bastion Restoration Committee. Merlin is part of the committee along with Leon, Yuffie, Aerith and Cid. Upon reuniting with Sora, he grants Sora the Blizzard element. Merlin gives Sora his first Summon charm which unlocks Chicken Little. Merlin also retrieves the 100 Acre Wood book from Traverse Town’s Zero District and places it on a shelf in his house. Later, he travels to Disney Castle with Sora and co. to open up a magical door to the past. Merlin seems to have developed a rivalry with Cid, who prefers technology to magic, while Merlin prefers magic to technology. Their rivalry nearly gets out of hand when Cid calls Merlin an old man, and Merlin zaps Hollow Bastion’s power computer, but thanks to Sora, Donald and Goofy, the town’s systems are saved. Merlin and Cid later recall that Hollow Bastion was formerly called Radiant Garden and decide to rename it to its former name. 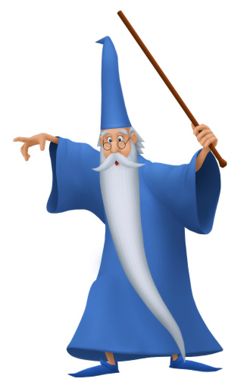