Mufasa is Simba’s father, and the previous king of the Pride Lands. Mufasa taught Simba how past kings lived in the stars, and would always be there to guide him in times of need.

A great king of the Pride Lands who was loved by all the animals who lived there. He passed on the wisdom of generations of kings to his son Simba.

Mufasa tried to climb to safety after saving young Simba from a stampede, but Scar sent him falling to his death.

When Simba was a small cub, Mufasa came to Wildebeest Gorge to save him from being crushed by stampeding wildebeests. Although he saved Simba, he had to climb a cliff to exit the gorge. When he got to the top, he was tossed off the cliff by his own brother, Scar, and crushed by the stampede down below. After his death, Scar convinced Simba that it was his fault (Simba’s) that Mufasa had died, and encouraged him to run away and never return. Scar then told the other lions that both Mufasa and Simba had died in the stampede, allowing him to take control of the Pride Lands as its new king.

Later, Mufasa appeared to Simba as a spirit to enlighten Simba’s courage to take his role as the Pride Lands’ true king by usurping Scar’s leadership.

It is his spirit (in the form of a star) that gives Sora access to a new pathway. 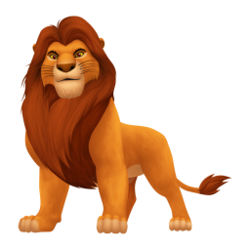