Mushu is a recurring character and Summon in the Kingdom Hearts series. He first appeared in the Disney film Mulan.

One of the guardian spirits of an ancient clan. He was banished by the other guardians because of his foolish ways. Thought small, he has the power of a great dragon. Press X Button for Fire Breath attack. Cost: 3 MP

Once a guardian dragon of a Chinese family. Due to past mistakes, he lost much of his former power. If Sora calls, Mushu will come to our aid.

He used to be one of the Fa family guardians, but Mushu’s mistakes got him demoted to the lowly job of gong ringer. He hopes to prove himself and win back his place among the other guardians by helping Mulan.

Mushu gave Sora and his friends some valuable help during their last adventure.

In Kingdom Hearts, Mushu survived the destruction of his world, The Land of Dragons and became a Summon Gem. After the death of Maleficent in her Dragon form, the Fireglow Gem is left behind. When delivered to the Fairy Godmother, she restores his spirit and allows Sora to call forth Mushu in battle. Mushu is one of the strongest of the Summons, capable of continously shooting fireballs from his mouth. He returns to his world when it is restored at the end of Kingdom Hearts.

Mushu appears as a figment of Sora’s memories in Chain of Memories. You can obtain his Summon Card in the Key to Rewards room in the Hollow Bastion floor.

Mushu returns in Kingdom Hearts II but not as a Summon. He is Mulan’s guardian in the Land of Dragons, one of the first worlds Sora, Donald and Goofy visit. Mushu is mistook for a Heartless at first due to his giant shadow cast on a rock. He is shocked to see his old friends in his world and introduces Mulan to them and explains her situation. Mushu’s attempts to teach Mulan to act like a soldier aren’t very good, making her walk oddly and even contributing to a brawl starting. Later, he then tells Mulan that he saw Shan-Yu in a cave which turns out to be empty except for Heartless. 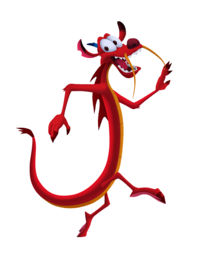