Nala is a lioness from the world Pride Lands in Kingdom Hearts II. She originates from the Disney movie The Lion King. She is daughter of the lioness Sarafina and was decided to be Simba’s wife ever since they were cubs.

When she heard that Simba and their king Mufasa were dead, she was devastated, and Scar became the new king of the Pride Lands, and ravage the country in the process.

Simba’s childhood friend Nala has grown up to be a strong lioness. She’s searching for help to save the Pride Lands, which have fallen into a terrible state.

After years went by, Nala grew up to be a fine lioness. When Sora, Donald and Goofy first visit their world, they saved her from a bunch of Heartless that were chasing her. She then asked them to help defeat Scar. In return, she taught Sora the Dash command. But after asking advice from Rafiki, they were cut out of the job.

When Nala tells Sora about Simba’s existence, Sora tells her that he is well and alive. Together, they go off to find him.

They reunite with Simba at the oasis and go back to the Pride Lands to face his uncle. Simba fights Scar and wins, and becomes the new king of the Pride Lands.

Upon Sora’s second visit, Nala has become Simba’s wife and is carrying their child. When Scar’s ghost terrorizes the Pride Lands, everyone runs away in fear, except Nala, who stays behind protected by Pumbaa until Simba comes back to meet his fear. 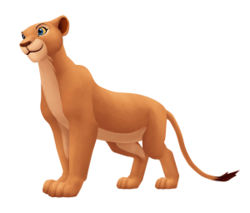