Naminé is the Nobody of Kairi, and wields the power to manipulate the memories of Sora and those close to him. Her first appearance is in Kingdom Hearts: Chain of Memories. Her name means “sea wave” in Japanese and “name” in Latin.

A young witch who, under orders from Marluxia, rewrote much of Sora’s memory.

Because Naminé based the false memories on Sora’s feelings toward Kairi, Sora believed he and Naminé had been friends since childhood.

But truth be told, the two had never met before Castle Oblivion.

A young witch who can manipulate memories.

Under orders from the Organization, Naminé shadowed Kairi and altered Sora`s memory. But the forgiveness in Sora`s heart moved her to disobey those orders.

Now she watches over Sora until the reconstruction of his memories is complete.

A girl with the power to manipulate memories. She seems to have some strong connection to Sora.

Naminé was born when Sora stabbed himself with Ansem’s artificial Keyblade in order to restore Kairi near the end of Kingdom Hearts. This made Naminé a very odd Nobody, born from Kairi’s heart and Sora’s body and soul. Kairi’s own body never became a Nobody because her heart lacked darkness (since she was one of the Princesses of Heart), so her body and soul were never able to leave the Realm of Light and thus made it seem like Kairi was in a comatose state until she regained her heart. However, this means that Naminé was also born without Kairi’s memories, only furthering her status as an unusual entity, and she and Kairi are incomplete without each other. And because of the fact that Naminé is formed from Sora’s body, she has the power to manipulate his memories as well as the memories of those who are connected to him, prompting several others, even herself, to call her a “witch”. She came into being at Castle Oblivion, found by the Organization XIII. 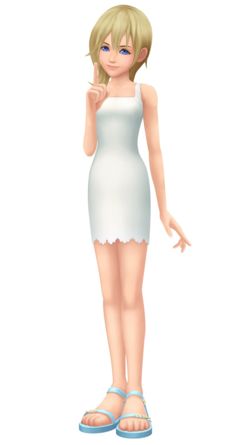