A beautiful horse that can fly just like an eagle, Pegasus is Hercules’ loyal partner. Hercules’ father Zeus created Pegasus from a cloud and gave him to Hercules when he was a baby.

Hercules and Pegasus were separated for a while, but they were reunited again when they grew up.

During Sora’s first visit, Megara is captured by Hades and Sora and the others go off to rescue her while Hercules fights the Hydra at the Coliseum. When Meg is finally found, Pegasus takes her to safety. When they all return to the Coliseum, they find it destroyed by the Hydra, making Hercules fall into a depressed state. During the battle against the Hydra, Pegasus helps Sora by letting him ride on his back to attack the Hydra’s multiple heads.

During Sora’s second visit, Pegasus is only present to take Meg to safety after Hercules saves her from the Styx river and restores his confidence in the process.

In the end credits, he is seen enjoying the view of the rebuilt Coliseum with the others. 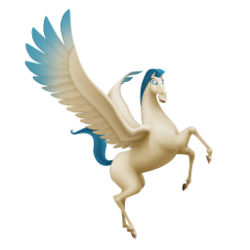