Back in the times before Disney Castle stood where it does now, there was a steamboat service run near the future castle’s site. Riding up and down the Timeless River, the steamboat was a treasured part of the area, and would dock at the local Wharf with supplies. The shipmaster and captain of the steamboat was the grumpy, yet good-hearted Pete.

Before he became the evil man that King Mickey banished to another dimension, Pete was Mickey’s boss.

Captain of a river steamboat; this is a different Pete than the one we know. He doesn’t seem to have any connection with the Heartless. Why, he doesn’t even recognize Sora, Donald, and Goofy!

I wonder if he’s just trying to trick us.

Captain of a river steamboat. He’s Pete, but from the past. A long time ago, King Mickey started out working for Pete on his boat.

Somehow, Pete’s managed to get his boat stolen by himself — that is, by the Pete from the future!

When Sora traveled back in time to find the reason for the evil surrounding Disney Castle, he was quick to blame past-Pete, unaware that he is the Pete of the past. However, when Sora, Donald Duck, and Goofy pointed their fingers to answer past-Pete’s question if they saw any bad guys, the offended shipmaster could have cared less. Though mad at such an accusation, past-Pete had more on his mind–somebody stole his steamboat, and his first mate Mickey was missing.

Though past-Pete continued on to the Port, this didn’t stop Sora from chasing after him. Again pointing fingers, Sora attacked Pete, even though he claimed innocent, not even knowing what was going on. Sora, Donald, and Goofy didn’t cut off the attack until poor Pete injured his back. Deciding that somehow this Pete was innocent (he never even summoned Heartless to his aid), Sora and his friends comforted past-Pete. 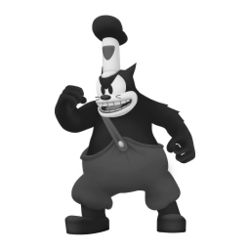 Heading over to Timeless River...