Pete is a follower of Maleficent and former captain of a steamboat, Pete has become a commander of Maleficent’s Heartless army. Pete used to live in Disney Castle, but was cast into another dimension by King Mickey for causing mischief. His original name was Pegleg Pete, and he holds the distinction of being the oldest continuous Disney character, appearing as early as Walt Disney’s Alice Comedies.

Although he plays an antagonistic role in Kingdom Hearts II, he is mostly just a comic-relief character and doesn’t pose much of a threat, as Sora himself states. As Sora puts it, Pete’s “not smart enough to tie his own shoes”.

However, in his own way, Pete did serve a very unique role. In the first game, Maleficent held meetings at Hollow Bastion with the other Disney villains, in which they would receive orders from her directly. However, in the second game, Maleficent seems to have been a lot busier, looking after important matters that happened after her death. As such, she was never able to hold direct meetings, although she seems to have had connections with the other villains like Scar and Barbossa. Instead, Pete served as a sort of emissary, delivering orders or possibly recruiting allies in the field.

Pete has been confirmed to make an appearance in the upcoming Kingdom Hearts 358/2 Days.

A tough and mean former steamboat captain, Donald and Goofy know Pete real well – he’s so bad that King Mickey was forced to banish him to another dimension.

Maleficent found Pete there and helped him escape from exile. Since then, he’s been traveling the worlds, assembling an army of Heartless for Maleficent. It’s pretty certain that the two of them are planning to take over and rule all the worlds.

Many, many years before Kingdom Hearts II, Pete worked as the captain of a steamboat. His deck hand was none other than the future king of Disney Castle, Mickey Mouse. This past association causes Pete to refer to Mickey as “the Boat-Boy King.”

At some undetermined point, “a long time ago,” Pete turned to evil, and King Mickey banished him to another dimension. He found aid in the form of Maleficent, who helped him escape his exile. In return, Pete became a commander in her Heartless army, and traveled around many worlds building up more and more legions of Heartless to help her plot of world-domination.

Pete is first encountered outside Yen Sid’s Tower, having sent in a squad of Heartless to turn the powerful sorcerer Yen Sid into a Heartless to act as Pete’s bodyguard. But Sora, Donald and Goofy showed up, informing him of Maleficent’s demise, and Pete fled. 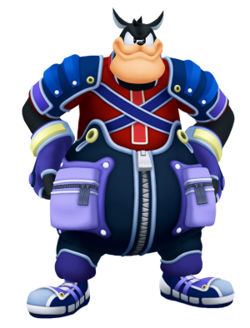 Created as a companion video to my series o...