Prince Eric is the main love interest of Ariel in both the film The Little Mermaid and Kingdom Hearts II. The storyline for each remains virtually the same.

A prince from the world on land who loves the sea. Ariel saved him from drowning when his ship sank one stormy night.

Prince Eric doesn’t remember anything from that night except Ariel’s enchanting voice. Now he’s searching everywhere for the girl who saved him.

Eric is a prince on the surface land of Atlantica. In all his life, he has been living in ignorance about the mysteries of the sea world.

Eric was saved by Ariel after his ship was wrecked in a storm. While he was unconscious, Ariel sang to him, and when he woke up, he recognized nothing about Ariel than her voice.

To be able to be with him, Ariel signed a contract with Ursula that allows her to become human for three days in exchange for her voice, and unless she makes the prince kiss her before sundown of the third day, she will belong to her forever.

Eric met Ariel at the beach where he was brought ashore, but did not recognize her because of her loss of voice. On the second night, he and Ariel were out on a little boat and almost kissed, until Flotsam and Jetsam interrupted them. The next morning, Ursula turned into a human girl called Vanessa and cast a spell on Eric to make him fall in love with her. However, Sora interferes with her plan and breaks Ursula’s charm, thus giving Ariel her voice back and breaks Eric out of the spell. Eric, having recognized Ariel, confesses his love to her, but Ursula takes her back to the sea.

He then rescues Ariel and defeats Ursula with the help of Sora, Donald and Goofy. Upon her defeat, Ariel reveals to Eric about her true identity, but he admits that it does not change how he feels. The romantic scene makes King Triton finally change his mind and let his daughter be with a human prince.

In the ending credits, Eric and Ariel, having finally become human, are seen getting married in a ceremony gathered with humans and merpeople. 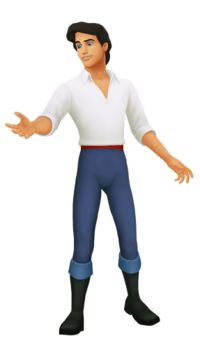