Pumbaa is a warthog living in the Pride Lands who only appears in Kingdom Hearts II. He grew up in the Oasis with Timon and Simba, and together lived a carefree life until Nala found Simba and tried to convince him to go back to the Pride Lands with her. With the help of Sora, Donald and Goofy, he and Timon pulled their courage together to help fight Scar’s hyena army.

He usually has very little courage and is not much of a fighter, but whenever his friends need help, he will be there to protect them and make sure they are safe.

Pumbaa and Timon often say their motto Hakuna Matata, which means no worries in Swahili.

A warthog and one of Simba’s closest pals. He found Simba, almost dead of thirst, when he was just a cub. Pumbaa and his best buddy Timon taught Simba their motto, Hakuna Matata, which means “no worries.”

Some folks are a bit put off by Pumbaa’s pungency, but a kinder fellow you’ll never find.

Pumbaa is not seen until much later in the first visit, and has very few lines throughout. The only things worth noting are his almost-being-eaten by Nala (similar to the movie), and his capture by the Hyenas Shenzi, Banzai and Ed which leads to a boss fight against the three hyenas.

At the end of the final cutscene, he is shown to be quite nervous due to Timon’s comment: “What if he[Simba] forgets to tell the predators who we are?” with Pumbaa shortly responding apprehensively, “Yeah, and I’M NOT GOING TO BE SOMEONE’S PORK DIIIIINNNNEEERR!” finishing in a panic and running off in a dash.

Pumbaa is scarcely seen in the second visit, and mostly only plays a role of hinting where you should go next. However, in the end, Pumbaa adds onto Timon’s “Live for today” words by saying: “And put your past behind you!”, moving in a carefree, joyous trot. He also shows courage by protecting Nala from Scar’s Ghost up on Pride Rock, despite being frightened by the apparition. 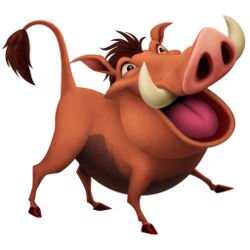 Title
Timon & Pumbaa: Stand By Me (Song)
Keywords
timon, and, pumbaa, the, lion, king, disney, stand, by, me
Description
All rights go﻿ to Disney, I do not own these videos.