Queen Minnie is the queen of Disney Castle, who rules the peaceful kingdom alongside King Mickey. Her first appearence was in Disney’s “Plane Crazy”.

Queen of Disney Castle, ruling in Mickey’s absence. I, Jiminy Cricket, am accompanying Donald and Goofy as the royal chronicler at her request. Queen Minnie is more concerned than anyone about the king’s disappearance.

Minnie made her screen debut in “Steamboat Willie” (1928).

She is ruling in Mickey’s absence. At her request, I’m tagging along with Donald and Goofy as the Royal Chronicler.

Queen Minnie is quite concerned about the King, but she knows in her heart that he’ll be all right.

Queen Minnie and Daisy Duck go over to the flowery courtyard, where they see Donald Duck fussing with Goofy about a top secret. They demand an explanation for that, so he hands over the letter he found in Pluto’s mouth from King Mickey. After that, she has them follow the king’s lead, worrying for all of them as well as Chip and Dale, who are the engineers for the Gummi Ship. From there on, she rules the kingdom on her own.

She is the one who sent Jiminy as their royal chronicler.

She is not really seen again until the ending credits of Kingdom Hearts, where she sees Donald’s nephews Huey, Louie and Dewey return from Traverse Town. 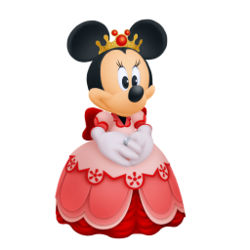