The Rock Titan is an enemy from Kingdom Hearts.

One of the two titans that made it into Kingdom Hearts, the Rock Titan is the fifth-strongest enemy in the game, beating the Behemoth and succumbing to the Ice Titan. He was the end-boss of the Olympus Coliseum, and the final fight in the Hades Cup. The reward for defeating the Rock Titan is the ability to use the Trinity Limit.

Immortal giant in the form of a stone crag. He has two heads, but can only think with one at a time. Defeated once by Hercules, he’s now on the loose again, courtesy of Hades.

Rock Titan has few attacks, and he will not use them very often. One of his ground attacks is, he lifts its hands and pounds the ground releasing a large shock wave. Another ground attack is when he lifts one of his feet up really high and stomps down. His final (and most powerful) attack is when you knock him down, and his heads thrash around and hit you. 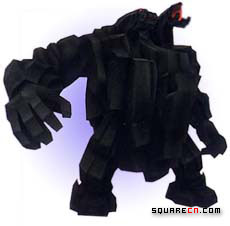