Roxas is an ex-member of Organization XIII and Sora’s Nobody. He was born when Sora took his own heart, and although Sora was soon restored, Roxas continued to endure. Prior to the events of Kingdom Hearts II he was the thirteenth member of Organization XIII, and bore the title Key of Destiny (?????? Meguriau Kagi lit Happened-upon Key) because of his ability to wield the Keyblade. His name is an anagram of Sora with the letter X added.

Roxas was also the mysterious hooded figure in “Another Side, Another Story” as well as in Deep Dive. During the prologue of Kingdom Hearts II, the player controls Roxas until Sora is awakened. In the upcoming game, Kingdom Hearts 358/2 Days for Nintendo DS, Roxas will be the main character. This game will focus on the time period between Roxas’s birth and his departure from the Organization, eventually leading to his capture at the hands of Riku and DiZ.

A boy who lived in Twilight Town and saw Sora’s memories in dreams.

His summer vacation has come to an end, and many of his thoughts and feelings with it.

He vanished with a satisfied look after battling Sora — but Sora was the only one who could see him in the first place.

As stated in the Secret Ansem Reports, Roxas was born when Sora stabbed himself with the Dark Keyblade forged from the hearts of six of the seven Princesses of Heart in order to free Kairi’s heart at the cost of his own. But Sora’s time as a Heartless was short, as Kairi’s light had fetched Sora’s heart from the darkness, restoring him to his former self. Thus, Sora and Roxas co-existed, but Roxas would be without his true memories, and the two were incomplete without one another. Even so, Roxas’ status as Sora’s Nobody granted him the ability to use the Keyblade. This makes Roxas a very unusual Nobody besides his capacity to experience actual human emotions, something that Nobodies are normally incapable of. However, as he wields a Keyblade, which serves as a homing beacon for the Heartless, he is constantly under risk of being attacked by them when not under the protection of other Organization members.

Roxas was born in Twilight Town and soon discovered by Xemnas, who gave him his name. Having nowhere else to go, Roxas joins the Organization in hopes of finding the answers he needs. On that same day, Roxas meets Axel, and the two soon become best friends.

As he spends more time with The Organization, Roxas grows increasingly impatient towards his unanswered questions, such as where he came from and why he can wield the Keyblade. He works actively to help the Organization in their plan for Kingdom Hearts, using the Keyblade to defeat the Heartless.

Eventually, Roxas becomes fed up with recurring dreams of Sora, the other self he didn’t know, and decides to leave the Organization to find him, hoping to solve all the mysteries behind his non-existence. Axel, who knows Sora’s whereabouts at the time, intercepts Roxas and tries to convince him not to go through with it, warning him that the Organization would destroy him if he betrayed them. However, Roxas remains indifferent, saying, “No one would miss me,” and continues on, leaving a dejected Axel behind.

Roxas, having just left the Organization to seek out Sora, is attacked at Memory’s Skyscraper by countless Neoshadow Heartless, which surround him. Roxas draws out his Keyblades, ready to defend himself. But, after slaying many Heartless, he realizes there are too many Heartless to fight alone. But when Riku suddenly appears, Roxas lends him his Oblivion keyblade and they both defeat the Neoshadows. However, Riku immediately turns on Roxas once the Heartless are defeated. Roxas bests Riku at first, but Riku willingly succumbs to his inner darkness and takes on the physical appearance of Xehanort’s Heartless. The fight continues, and then comes to an end when Riku is overwhelmed by the darkness and Xehanort’s Heartless familiar emerges to help, pummeling Roxas senseless and knocking him out before Riku is able to regain control. DiZ then appears and opens up a portal to the old mansion in Twilight Town, where Roxas came into being and where DiZ resides. DiZ’s intention was to join Sora and Roxas together in order to help Sora wake up faster after regaining his memories. However, he knows the Organization is hunting fervently for their missing member, so DiZ places him in a virtual Twilight Town. There, Roxas would be kept safely away from the Organization while he lived as a normal boy, unaware of his past. 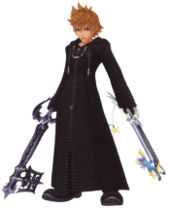