Saïx the Luna Diviner (?????? Tsuki ni Mau Majin lit Demon Man Dancing In The Moonlight), is Number 7 in the Organization XIII and the last of Xemnas’ companions to fall to Sora, as well as the apparent second-in-command. He derives power from the Moon, utilizes a claymore in battle, and controls the Berserker Nobodies.

Saïx, along with all other members of the Organization, will be a playable character in the multiplayer mode of Kingdom Hearts 358/2 Days.

He was in pursuit of the renegade Axel, but for some reason seemed more concerned about Sora’s well-being.

Saïx has no heart, but knows all too well how to injure one. No doubt his poise belies a more savage nature. He also insinuated he knew something about Riku.

Saïx relentlessly chased the renegade Axel. It was also he who caught Kairi after she eluded Axel, and threw her into the castle dungeon.

If Saïx sees something he can use, he will–and without a second thought.

Nobodies like him may look like they respond emotionally, but this is, in fact, a ruse. Nobodies have no hearts.

Saïx first appears in Hollow Bastion, along with all surviving Organization members, save Axel, to taunt Sora. He remarks “You’re doing well”, but like the others (save for Xigbar), does not confront Sora. 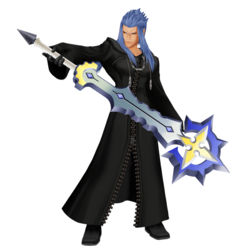 I do NOT own anything in this vid...