Sally is Jack Skellington’s girlfriend (technically speaking). She is a character in all Kingdom Hearts games. She was created by Dr. Finkelstein. Her limbs are sewn on, and they fall off sometimes. She is always the voice of reason to Jack, even though he doesn’t listen to it some of the times. She is intuitive, and can tell when things that Jack is planning are going to turn out wrong. Sally is one of the main characters in The Nightmare Before Christmas.

Dr. Finkelstein’s creation. She’s patched together from parts that sometimes come off and move about on their own. She loves Jack and tries to steer him in the right direction, though it doesn’t always work.

She appeared in “Tim Burton’s The Nightmare Before Christmas” (1993).

Dr. Finkelstein’s helper at the lab. He created her from various odds and ends.

Sally is secretly in love with Jack.

One of Dr. Finkelstein’s creations, Sally’s patched together with parts that sometimes come off and move around on their own. She’s gotten very good at mending herself with a needle and thread.

Sally usually helps Dr. Finkelstein around the lab, but she’d much rather spend time with Jack. 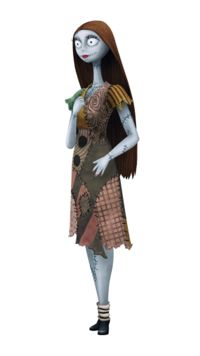