Santa Claus is a character in the Halloween Town world of Kingdom Hearts II. He is the leader of Christmas Town, and is constantly asked questions about Christmas by Jack Skellington. Jack Skellington almost always mispronounces Santa’s name as Sandy Claws, leaving Sora and company in a state of confusion.

Known to some as Father Christmas, Santa Claus makes children’s dreams come true every year on December 25th, delivering presents in a sleigh drawn by flying reindeer. To get ready for Christmas, he depends on his list of this year’s good little girls and boys.

It seems our friend Jack Skellington is a bit confused. He thinks Santa’s name is actually Sandy Claws.

During Sora’s second visit, Santa’s presents get stolen by Dr. Finkelstein’s Experiment. He helps Jack make decoy presents to attract the Experiment. Jack and company get them back by hiding in a decoy present. After they defeat the Experiment, Santa Claus decides to give Jack a taste of what it’s like to deliver Christmas presents. After Jack finishes delivering presents, Santa takes back his sleigh and brings forth beautiful snow drops as a present to those in Halloween Town. 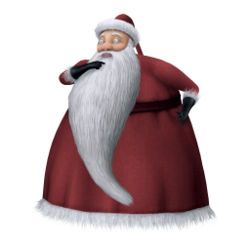