Scar is Simba’s evil uncle. Scar was always jealous of his older brother Mufasa, and always tried to hurt him so that he could become king of the Pride Lands.

After Mufasa’s death and Simba’s disappearance, Scar became king of the Pride Lands and used the hyenas to do his dirty work. Scar hasn’t taken care of the Pride Lands, and almost all the animals have been forced to leave.

Kingdom Hearts II lays host to the story of Scar’s rule over the Pride Lands. Scar teams up with Pete to control the Heartless as a way to rule the kingdom with discipline. Scar is the King of the Pride Lands, and when he first meets Sora, Donald and Goofy at Pride Rock, he wishes to eat them, as there is little food in the Pride Lands because of his Hyena minions. The trio escape and convince Simba to return to Pride Rock.

When this occurs, an overconfident Scar reveals the truth about Mufasa’s death, enraging Simba and prompting him to chase after his murderous uncle. While Sora, Donald, Goofy, Timon and Pumbaa hold off the Hyenas, Simba fights Scar at the top of Pride Rock. Sora and co. arrive in time to watch Simba throw the pretender to the throne off the cliff, but Pete arrives and tells them that because of the anger and jealousy within his heart, Scar has become a Heartless. A battle ensues as Scar climbs back up to the peak, with Sora and the gang victorious.

In the second vist to the Pride Lands, Scar appears as a dark ghost which haunts Simba, taunting him and saying he will never be a true king. The ghost lives as long as Simba has doubt in his heart. He eventually defeats this doubt by battling the Groundshaker, and the ghosts disappear. 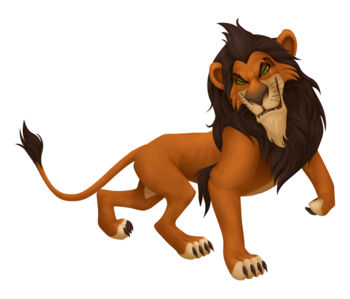 The Lion King - Scar and Mufasa