Scrooge McDuck is the world’s richest duck and cartoon character, originating from Duckburg. He is the uncle of Donald and the trio Huey, Dewey, and Louie. Uncle Scrooge McDuck wears a blue jacket, a top hat, pince-nez glasses and carries a walking stick. Scrooge can be grumpy at times, but initially is a friendly person. He loves his money and often swims in it. His only appearance outside of Disney’s Christmas Carol was in comics and the TV show Ducktales. Because of this, and the fact that his appearance in Kingdom Hearts II is not the same as it was in A Chrismas Carol, it can be argued that he is the only character in the game representing the late 80s/early 90s Disney TV shows. Before the events of Kingdom Hearts, Scrooge McDuck traveled with King Mickey on a Gummi Ship, selling sea-salt ice cream to the worlds they visited. They had to part ways when the Heartless started to appear.

Donald’s uncle. Before the Heartless appeared, he was using the Gummi Ship to travel across worlds, setting up a big business empire. Scrooge has more money than most folks can count. But for some reason, he’s pretty stingy about spending it.

Nowadays Scrooge is working on an ice cream venture he hopes will make him millions.

Scrooge McDuck resides in Hollow Bastion during the events of Kingdom Hearts II, along with his three nephews. He owns part of the town and his house seems to be built above the synthesizing shop. Opposite is a large freezer where McDuck tries to recreate the original sea-salt ice cream flavor, but is having little success. He meets Sora, Donald and Goofy during their first visit to Hollow Bastion, Donald and Scrooge both surprised to see each other. Throughout the visits to Hollow Bastion, Scrooge becomes closer and closer to achieivng his goal, eventually succeeding. He later invents a skateboard for Sora to try out. In the end credits after Sora and Riku defeat Xemnas and return to Destiny Islands, Scrooge is seen with King Mickey, Donald, Goofy, Queen Minnie, Daisy, Pluto, the nephews and Chip & Dale. What role he shall have in future games is unknown. 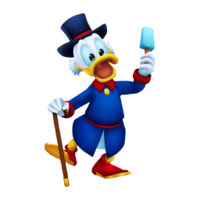