Seifer is a Final Fantasy character in Kingdom Hearts II. A character found in Twilight Town, Seifer is always seen with his posse Fuu, Rai and Vivi. He shares a rivalry with Hayner and his gang, and would most of the time pick a fight with the latter.

His personality is very similar to the Final Fantasy version: he’s cocky, sarcastic, and a self-proclaimed protector of order (even if he’s only trying to make people follow his own rules).

Seifer does his best to keep the town up to his own rigorous standards, but not everyone appreciates his high-handed tactics — take Hayner’s gang, for example.

His followers Fujin and Raijin are never far away.

Seifer is the leader of the simulated Twilight Town’s Disciplinary Committee which includes his followers Rai, Fuu, and Vivi.

He appears to be a rival of Roxas, always calling him a chicken-wuss and picking fights with him and his friends. He is also the town’s Champion for the Struggle Tournament in Twilight Town. He can be considered one of Twilight Town’s two bosses alongside Axel. In the digitalized Twilight Town, Hayner, Vivi, and Setzer can be fought once. Seifer can be fought as many times as you want which is good if you need to level up.

In the real Twilight Town, when he meets Sora, Donald and Goofy later in the game, he treats them like Roxas in the illusion Twilight Town. But when they save him and his gang from trouble, he gave them the Struggle Trophy, a sign of great respect. Seifer can also be fought in a Struggle battle after beating both Hayner and Setzer ten times each. 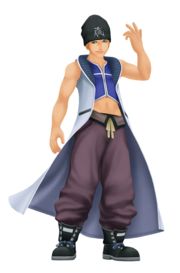