Selphie is a minor character in the Kingdom Hearts series, originally from Final Fantasy VIII.

Selphie seems to be a typical “girlie girl”, as she is carefree, fights very scarcely, and overall acts like a little girl. She also seems to be a romantic of sorts for when you talk to her a second time on Destiny Islands she mentions how romantic the Paopu Fruit legend is. Her romantic nature is heightened when Kairi tells her she is sending a letter to the “other boy”, who turns out to be Sora – Selphie is rather charmed by Kairi’s idea.

A spunky girl who lived on the Destiny Islands. She is rather impulsive, and quite the romanticist. Nobody knows what happened to her after her island disappeared.

A perky girl from Sora’s islands.

Selphie is assertive and tends to leap before she looks, she also has a romantic side.

A girl who lived on the same islands as Sora. She always played with Sora and the other boys.

Selphie’s whereabouts were in question after Destiny Islands vanished some time ago, but thanks to Sora’s help, she was able to return home.

Selphie is a resident of the Destiny Islands and a friend of Sora, Kairi and Riku. She spends most of her time with Tidus and Wakka. Like Tidus and Wakka, you can challenge her to a fight for experience points. She uses a jump rope (a would-be toy counterpart of her original incarnation’s weapon, a nunchaku) to attack, and is probably the fastest out of herself, Tidus, and Wakka. However, her attacks are easy to block and counter, which means more exp.

When the Heartless destroyed Destiny Islands, her whereabouts were unknown. The most possible answer to this is that she disappeared along when the islands were destroyed. But thanks to Sora, she was able to return along with Destiny Islands. 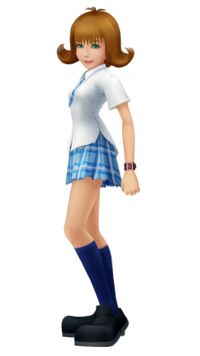